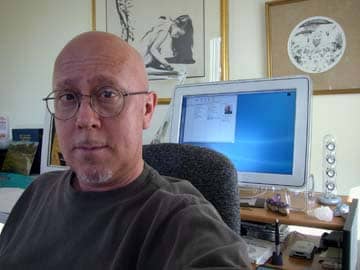 “…In which we find Bond in Venice, taking time out from his search for an opium smuggling drug lord, and indulging in his second favorite pastime - eating. Fresh figs, olives, and prosciutto are on all the menus.

"Pretending to be a wealthy writer, Bond scatters “thousand-lira notes around like leaves in Vallombrosa” to bolster his cover. In the morning, we find him strolling the backstreets and canals - hoping to uncover a tail. He visits a couple of churches to see if anyone was following him. At Café Florian, he drinks an Americano accompanied by a cornetto - the Italian version of a croissant. Later that morning, he buys a postcard to send to his secretary who had once visited Italy and never allowed him to forget it.

"But despite these diversions, the dark shadow of the smuggling operation is ever-present - watching over him like a grotesque gargoyle.”

Gerry studied watercolour with the late Shelly Bechtel-Sheppard, who taught classes at the Visual Arts Center in Richmond. Since 2010, Gerry has been painting “A Tribute to James Bond - 007” - a series of watercolour paintings that visually interpret the books of Ian Fleming, as well as the James Bond films.

He is a featured artist and literary contributor to the internationally recognized website Artistic License Renewed - Literary 007 and showcases his paintings on there and on his own websites, Jamesbondart.com and Wadsworthfineart.com.

In 2017, Gerry received a commission for a James Bond painting from the International Spy Museum in Washington, DC, and his painting now hangs in their new building at L’Enfant Plaza.