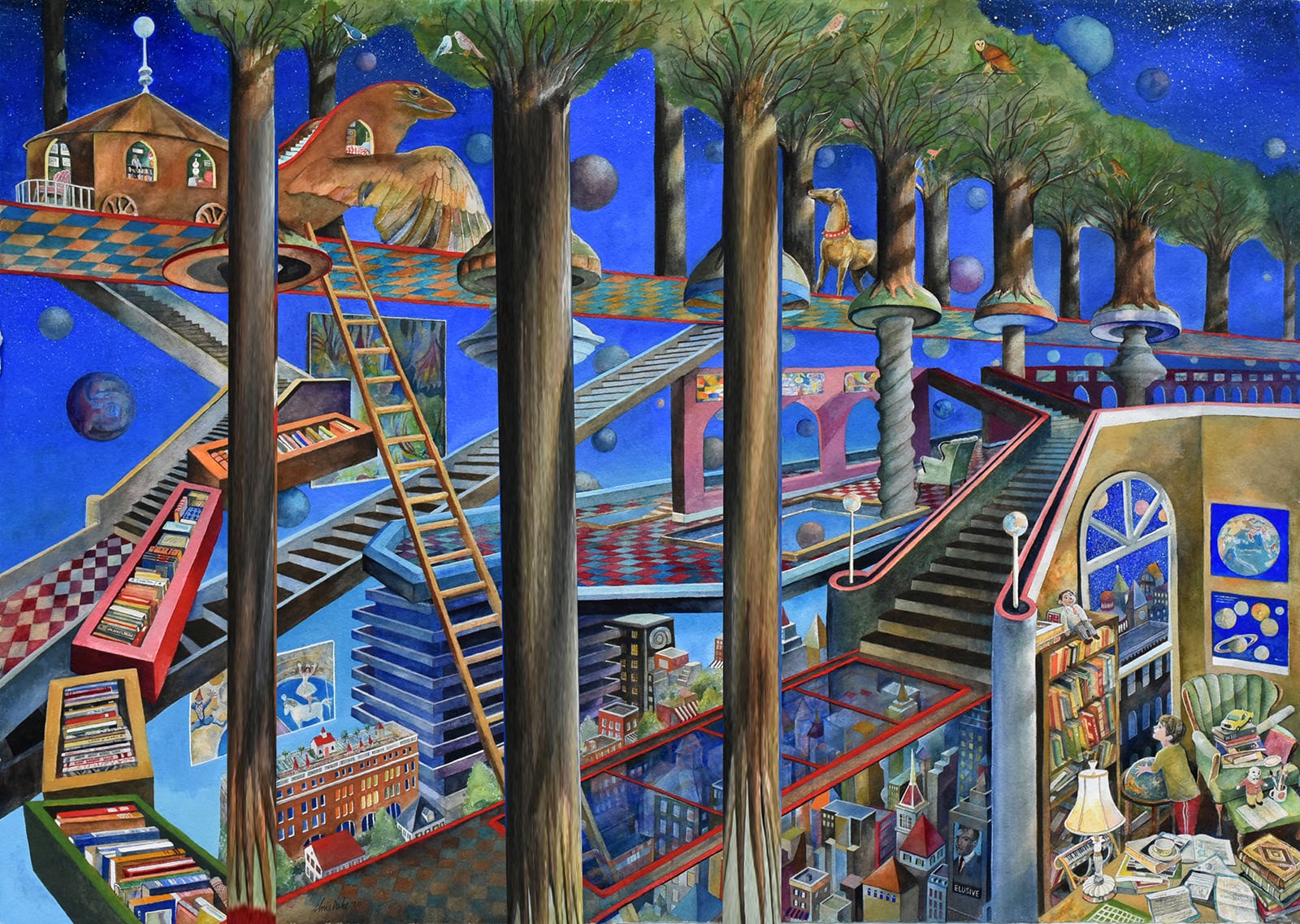 Some morsels of wisdom are so subtle that they are only absorbed (if at all) many years hence. Art is a journey. One has to embark upon it, to grapple with it, to grow in the process. Art is not achieved in abstractions and philosophies: it has edges and absoluteness and must be achieved hands-on. Art is concrete.

Having been a busy illustrator for many deadline-driven years, I am disciplined about my long work hours. Habits of time and attention deeply ingrained, my work has become a well-tread path. One boon of a long, productive career is a feeling of relative competence. I have heard “art” defined as creation where the artist does not entirely know the outcome herself. (Conversely, when the creator tightly orchestrates the outcome, the work becomes craft. Replicating, say, a beautiful pottery bowl is craft.) I find this differentiation edifying because, in spite of bountiful sketches and paint compositions, I can never wholly anticipate the outcome when I paint. Creating art is an adventure, a battle of wits with the blank whiteness of the canvas or paper. The potential, at the beginning, feels infinite. Soon, though, the work of art attains a voice of its own and tells you what it requires.

Art lives, for sure. Though art feels boundless, time is finite. There is much left to do, much to explore.

Bio
Chris Duke is an accomplished fine artist and portraitist. Chris feels that serious portraits are emblematic; they portray the subject to the viewer over an extended time, well beyond the day of the sitting. A finely wrought portrait immortalizes a moment and hopefully captures the spirit of the sitter.

Chris is the official portrait artist for THE PGA PLAYERS Championship. She has completed more than thirty portraits of winning golfers, all of which are on display at the Sawgrass clubhouse gallery in Ponte Vedra, Florida.

Having been one of America’s leading illustrators, Chris has worked for Fortune 500 companies such as American Express, AT&T, IBM, and Adidas, as well as for publications including the New York Times, People Magazine, and The Wall Street Journal.

She was – and still is – represented by art agents Frank and Jeff Lavaty in New York City. This professional relationship has spanned over five decades.

Currently, Chris focuses mostly on personal paintings personally meaningful to her, many including underpinnings of architectural drawing. Her themes, presently, concern interior quest and expansive seeing. This is her favorite work. She is also currently designing four stained glass windows for a beautiful Episcopal church in New York State.

Chris graduated from the Parsons School of Design in the early seventies and she holds a Master of Arts in Figurative Studies from the New York Academy of Art, circa 2002. In 2016, Chris and her husband John Gerbi, along with their menagerie, moved to Virginia.